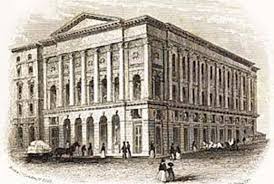 HISTORY OF THE BUILDING

St George’s Hall, in the very heart of Bradford, is a well-loved landmark in the city.  The building was designed by Henry Francis Lockwood and William Mawson in 1849.  They were a formidable partnership, designing some of the most distinguished buildings on booming Victorian Bradford’s skyline, such as the Wool Exchange and nearby City Hall.  Perhaps their most famous project was for Titus Salt, laying out of Saltaire’s mill, village and church in an Italianate Classical style, now a UNESCO World Heritage Site. 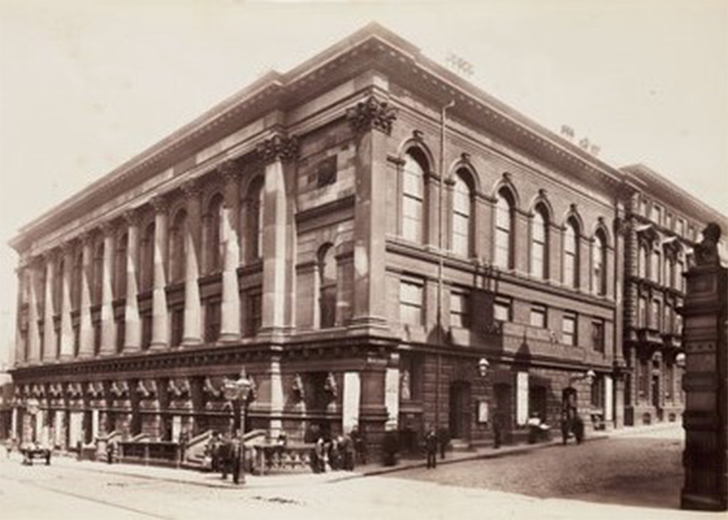 The 3,500-seater concert hall was built with the aim of “drawing people away from beer-houses and other low places, where music, dancing and amusements took place”.  It was intended to raise the quality of entertainment and venue for the people of Bradford.  Indeed, over the years, many famous names appeared there, including Charles Dickens, Winston Churchill and Harry Houdini.

It is a grand, imposing structure; detached, rectangular on plan, seven bays wide and five storeys high.  The walling is ashlar sandstone with matching detailing and deep modillion bracket entablature to the eaves.  The roof is hipped, natural slate pitched over the north (principal) portico.  Intricately carved details such as ornate garlands adorn the facades.

Time (and the northern climate) took their toll on the Hall.  Reactive repair work was carried out at various times throughout the twentieth century but, by 2016, there was widespread defective masonry, where the original surface of the stone had been lost through erosion and decay.  The roof was in need or urgent attention, with a significant number of cracked, slipped and previously repaired slate.  Roof timbers required repair and replacement.  The leadwork needed to be replaced and the rainwater goods were in poor condition.  Finally, the building’s timber sash windows had deteriorated as a result of wet rot.  It was clear that the future of this important building needed to be safeguarded through appropriate restoration work.

Stone Edge was appointed as the specialist contractor, partnering with main contractor Henry Boot Construction.  We were contracted to undertake the restoration of the exterior envelope of the building.  Our work here was to include; masonry repairs, removal and recovering of the roof, structural repairs, leadwork and new rainwater goods. 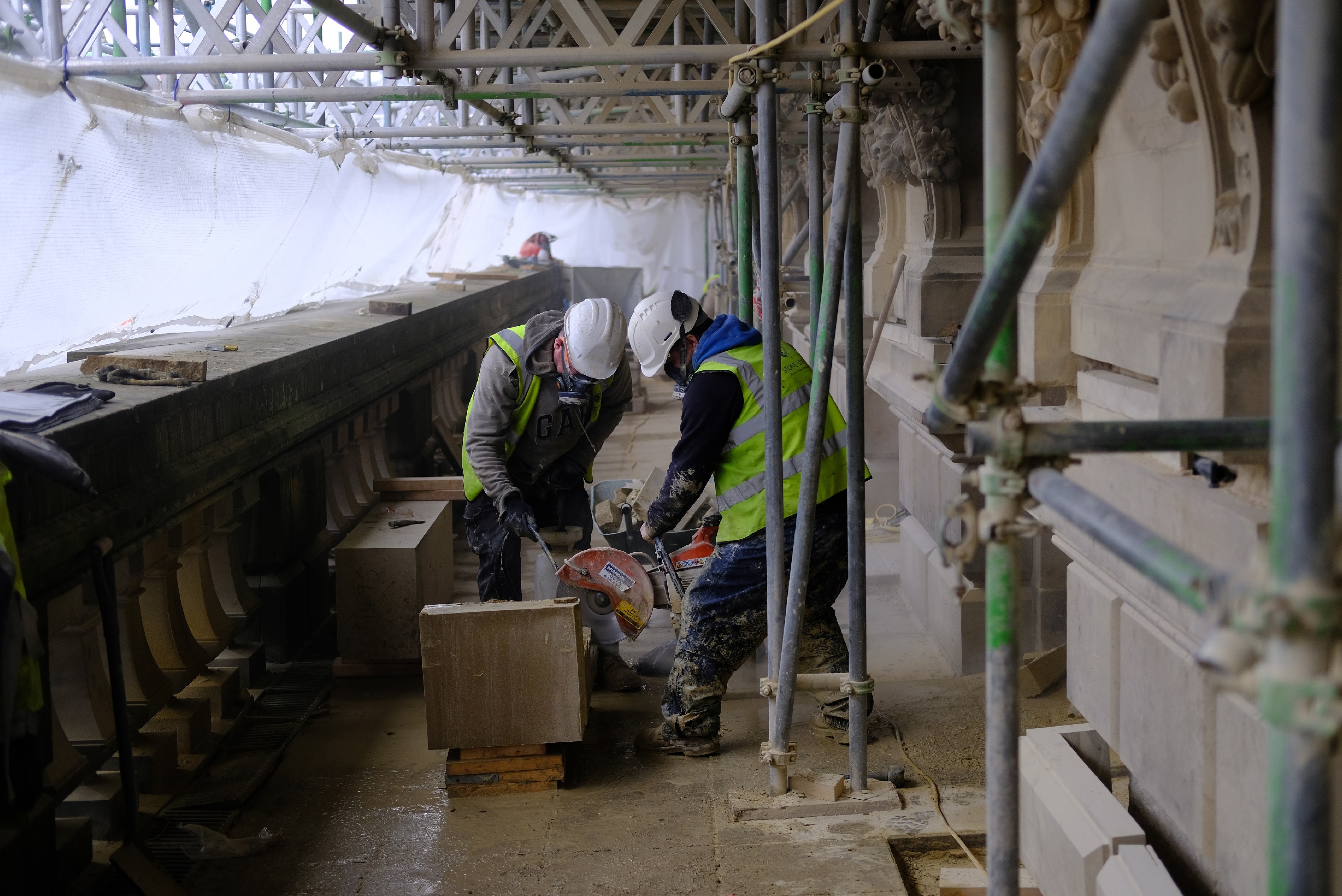 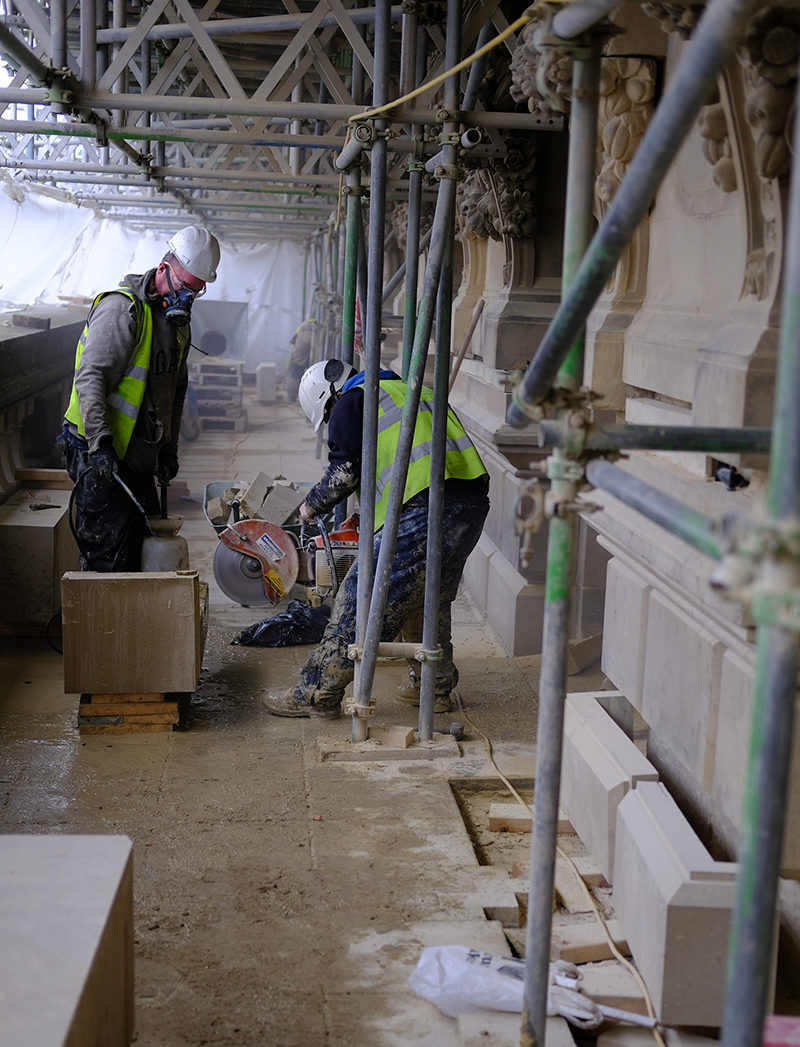 Following extensive surveys and consideration by the architect, the high-risk elements of the masonry were identified for repair or replacement.  A mix of Crossland Hill and Blaxter stone types were specified.  Stone Edge was supplied with in-depth plans of every façade of the building, with the work detailed right down to individual stones, or parts of them.  Over 1,000 individual repairs were considered and assessed throughout the duration of the works. 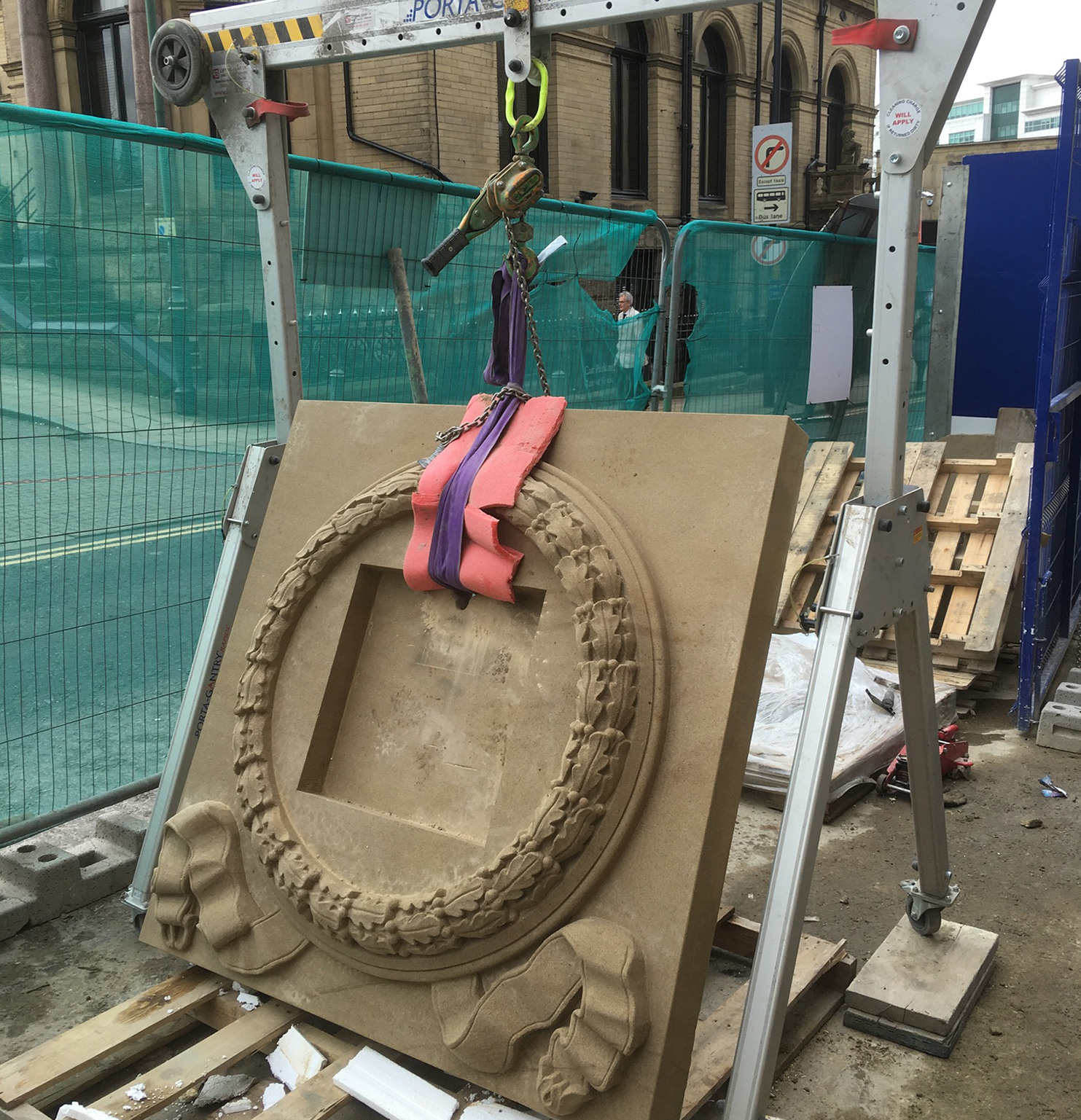 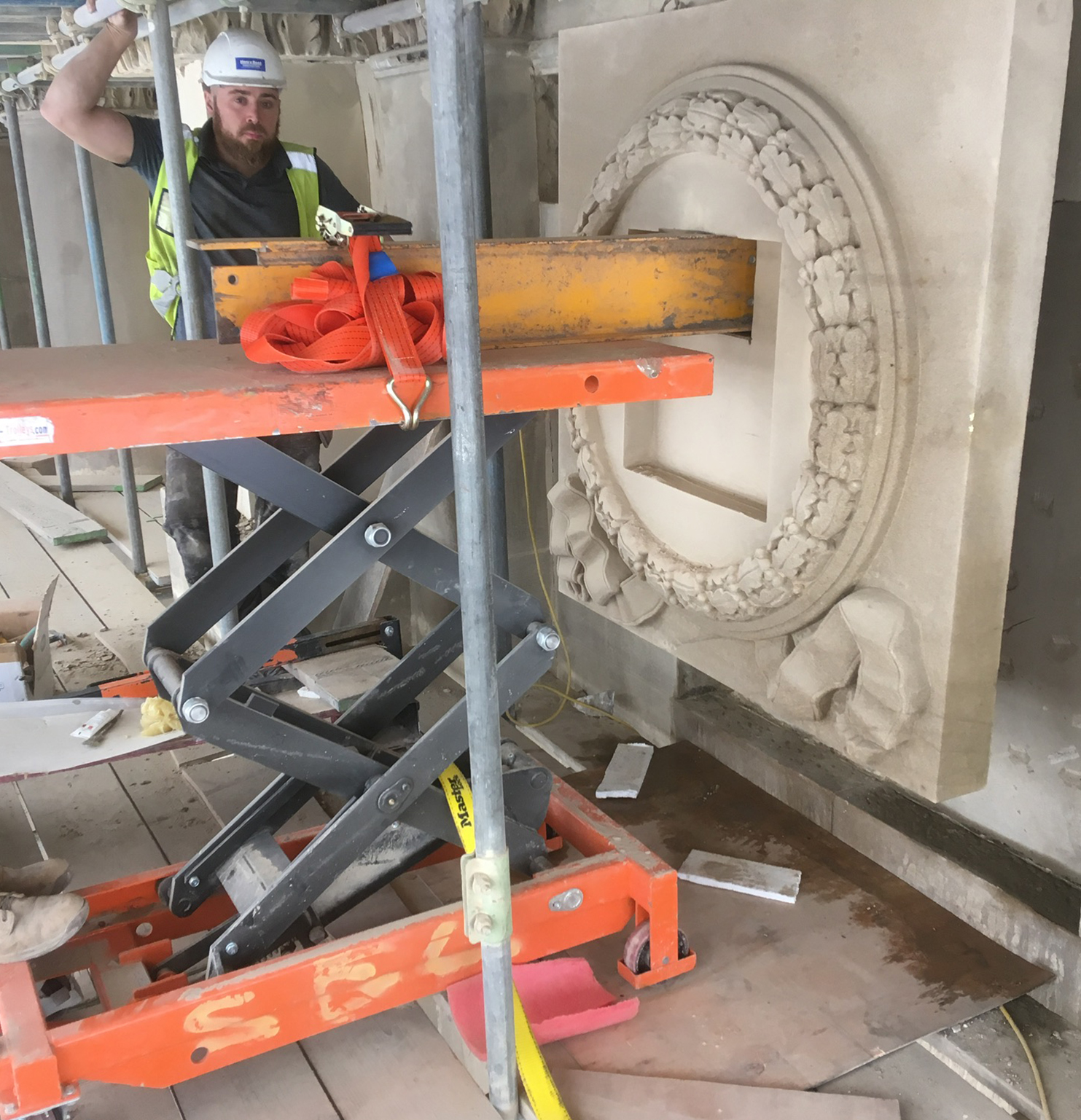 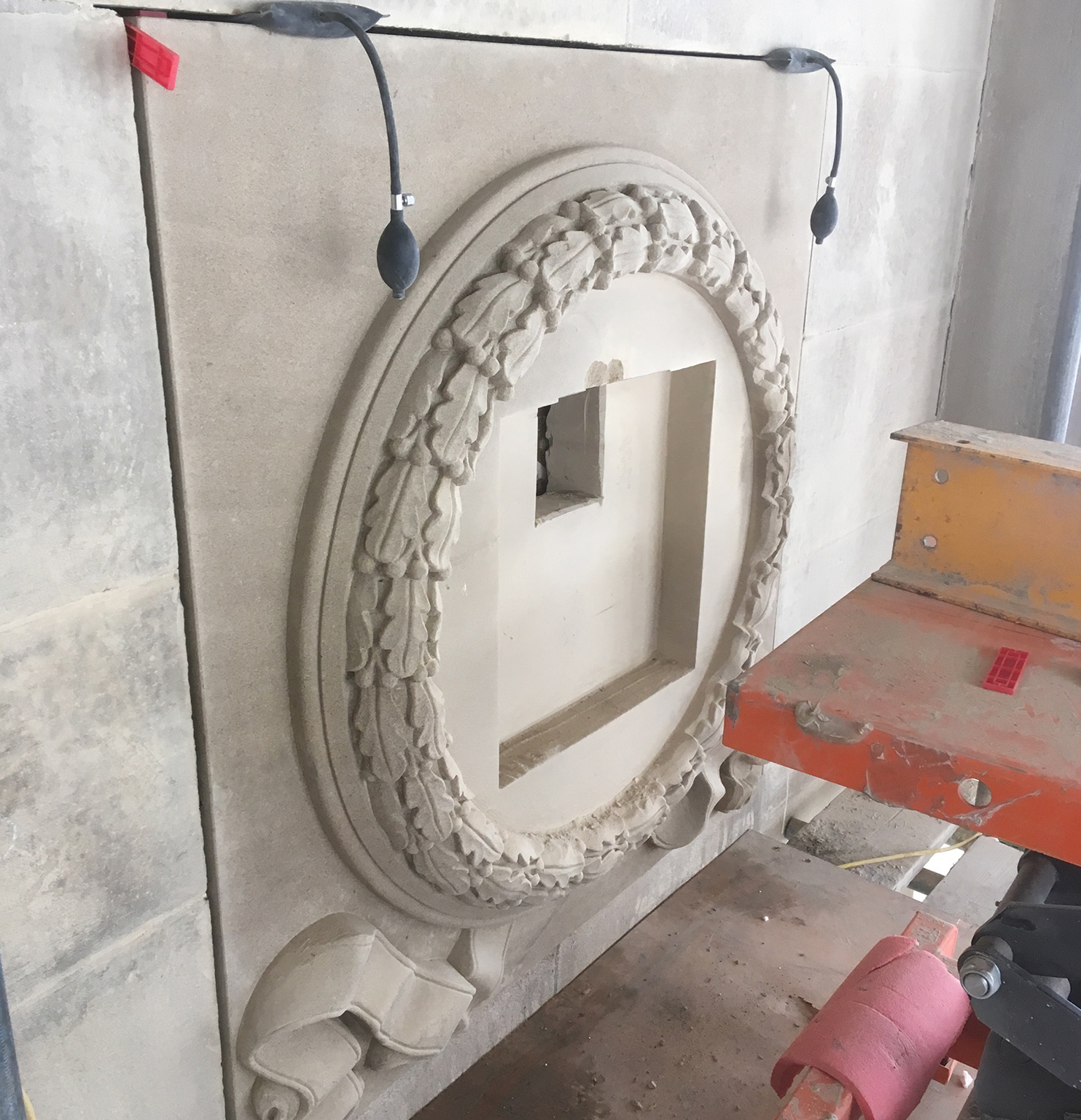 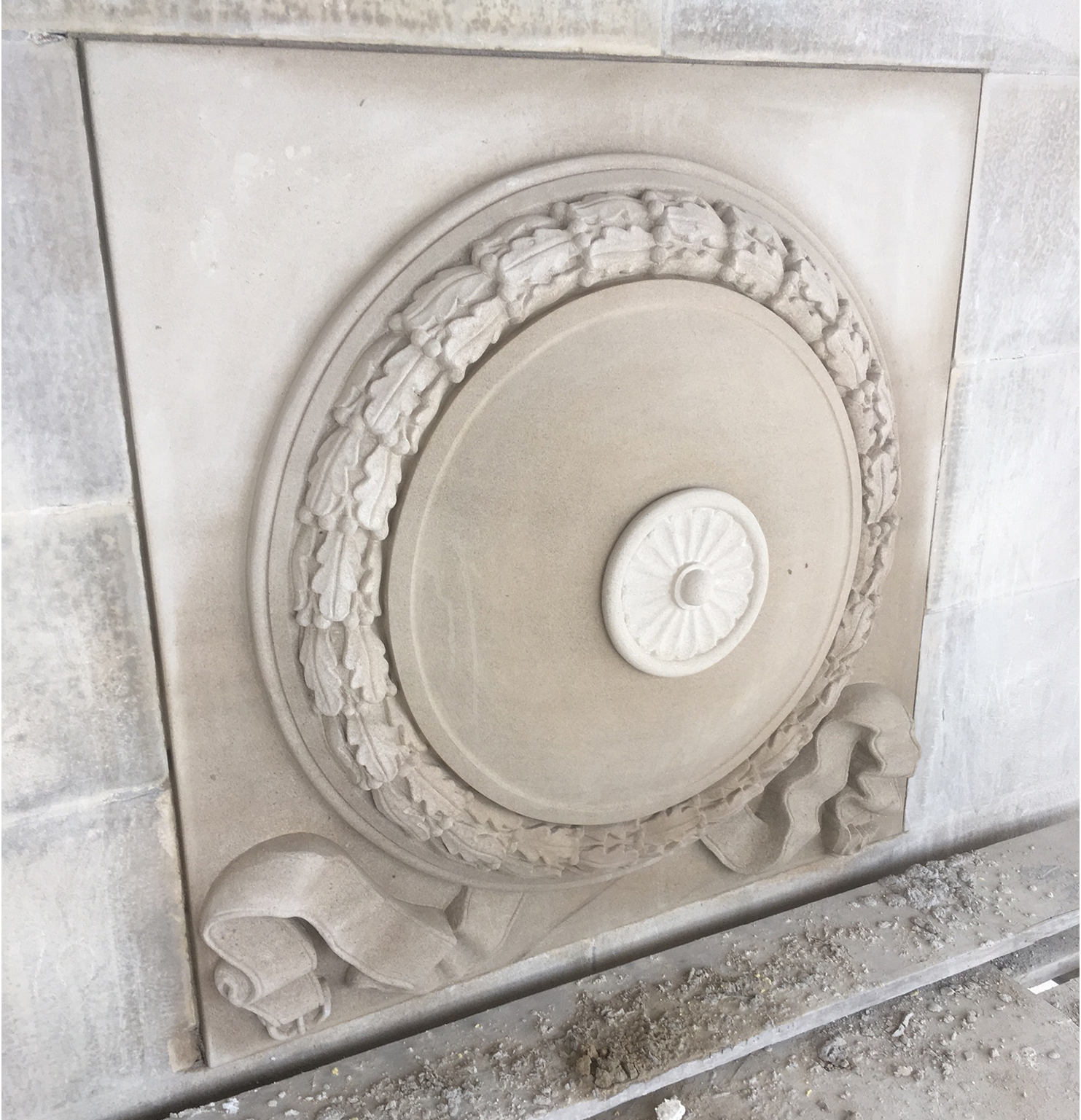 Extensive surveys had been carried out by the professional team which revealed widespread failure of the existing slate covering.  Our task was to remove the roof covering and re-slate it with as much salvaged material as possible.  New, matching Burlington slate would be sourced to replace the material that could not be reused.

As is often the case with historic buildings, and despite the extensive surveys, it had not been possible to discover the full story of the problems with the roof structure.  Once we removed the coverings, it became apparent that the rafters had been damaged during a historic fire and also needed replacement.  The scope of works was extended to include these and our roofing teams set to installing around 1,000 new rafter sections. 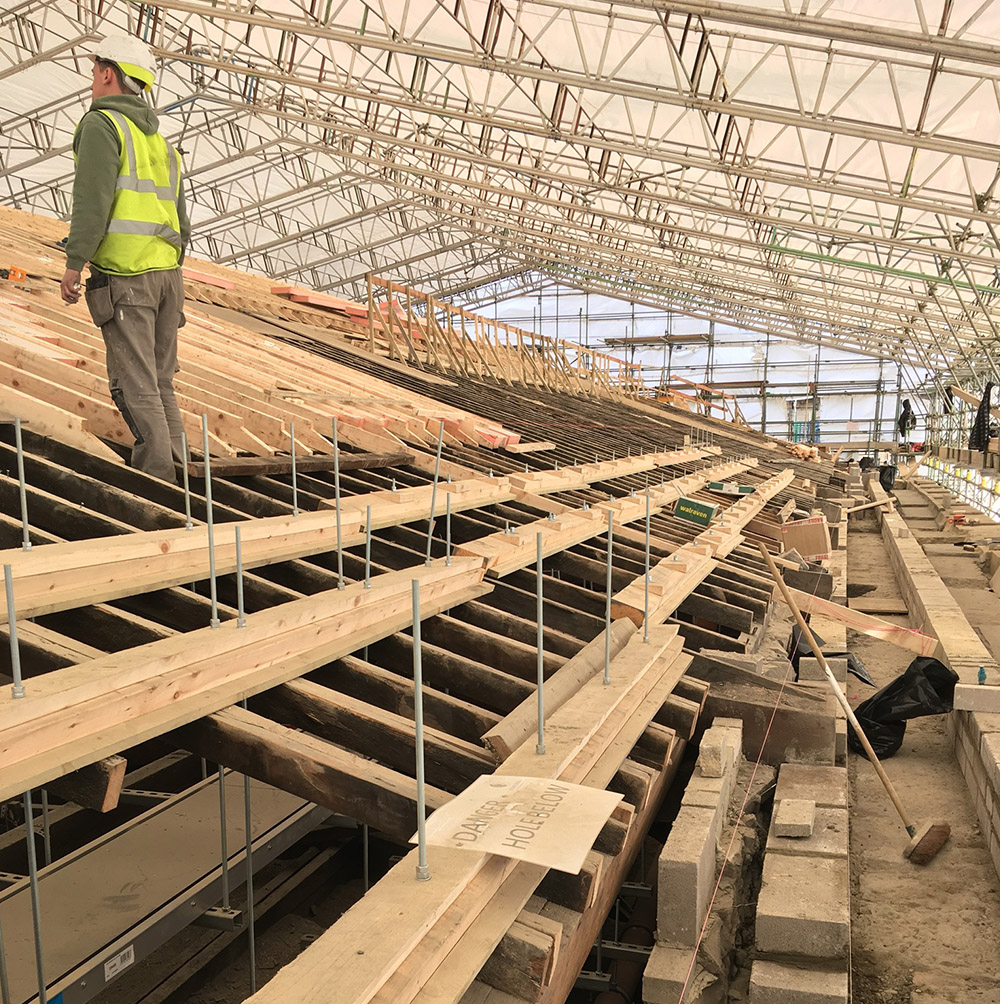 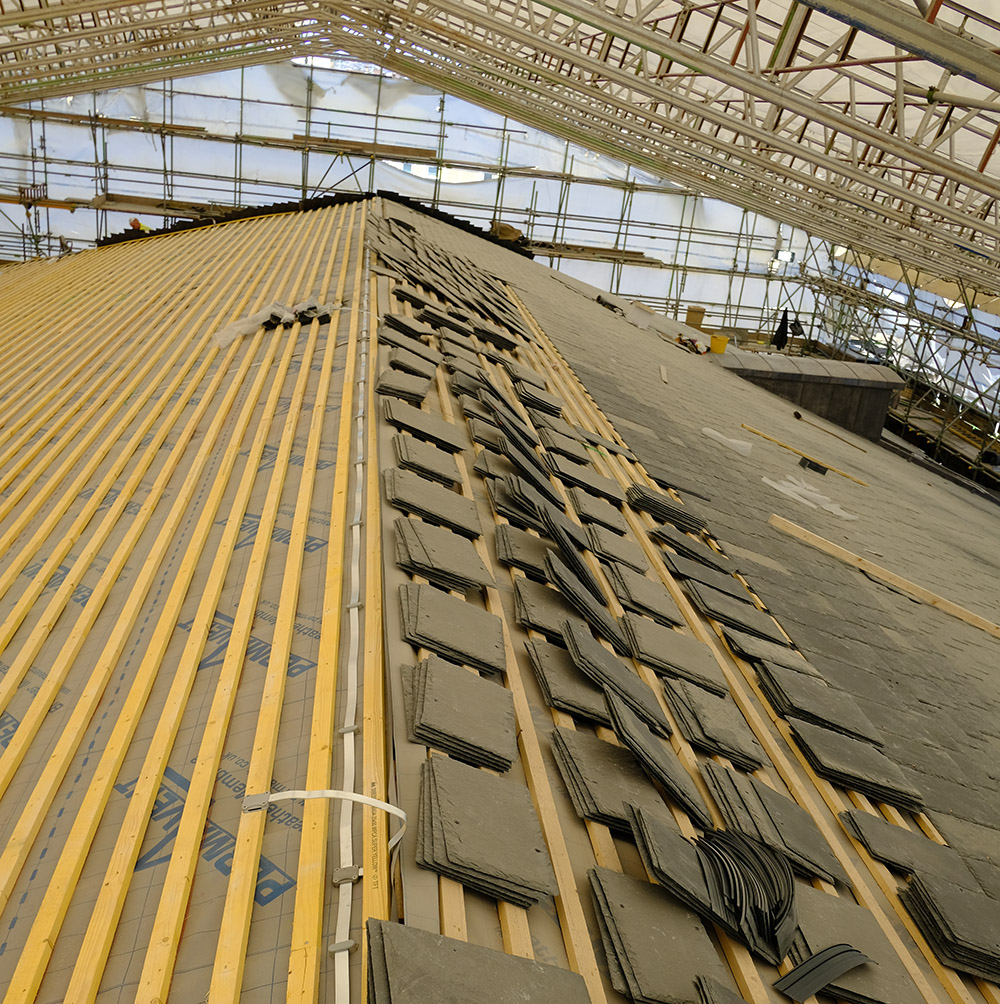 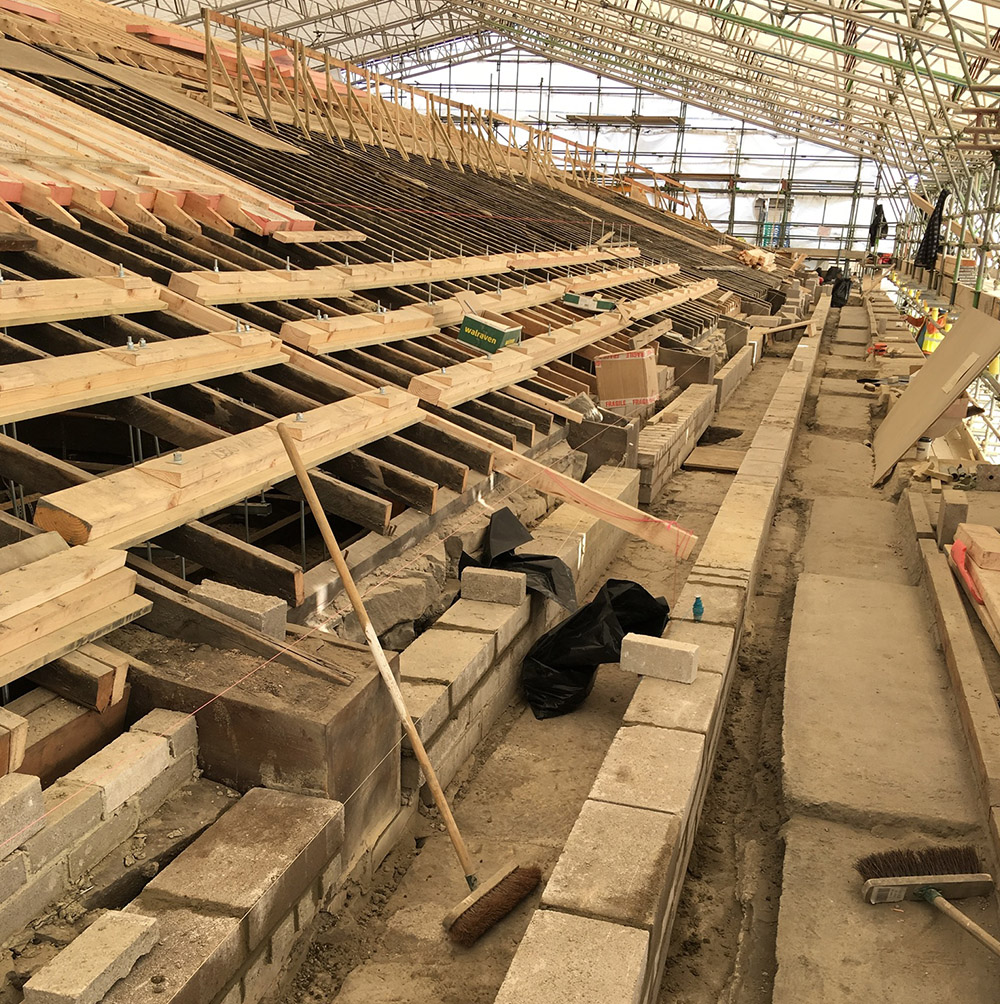 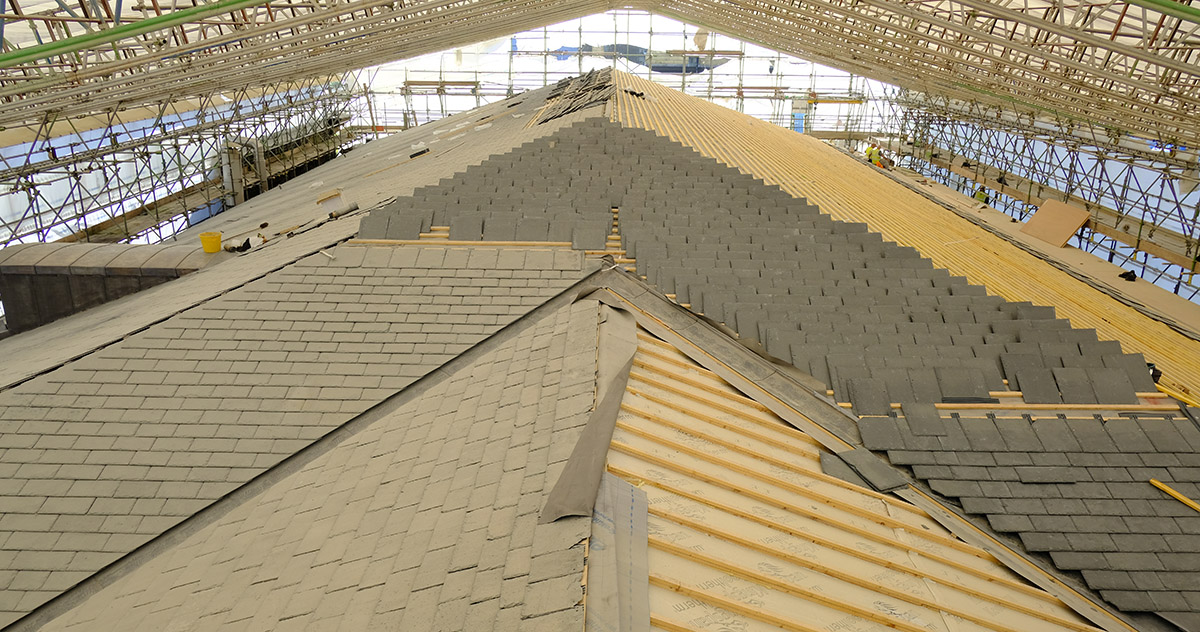 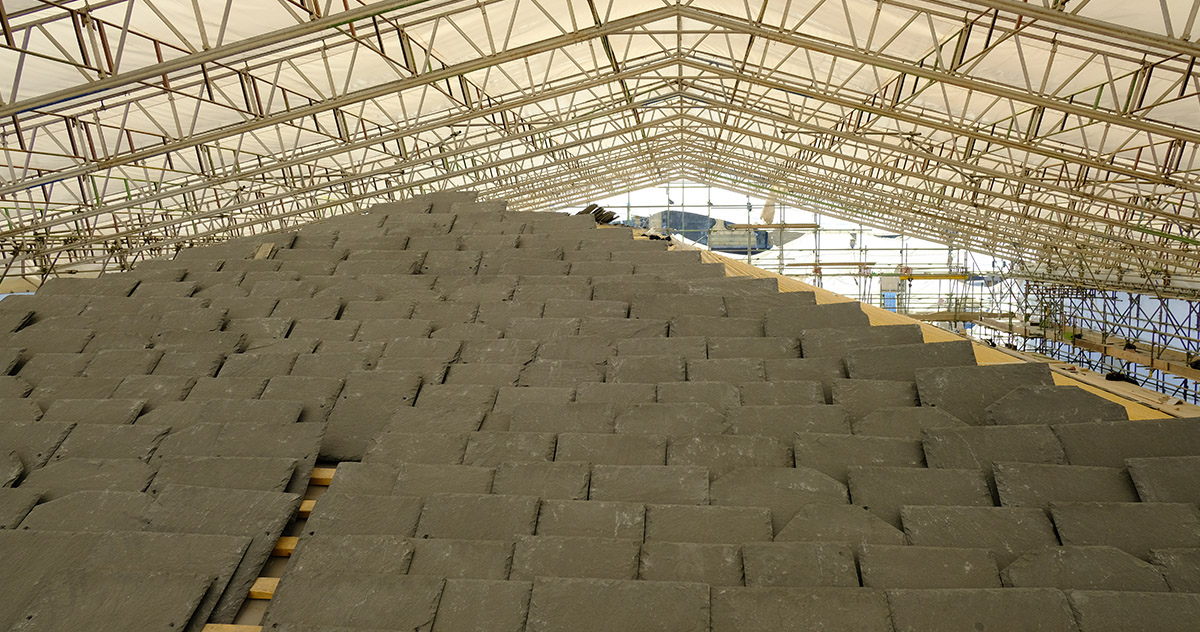 Our leadworkers have replaced the failing leadwork.

A project of this scale has enabled them to truly showcase their skills, producing work of the highest level of craftsmanship.

The work has enabled the team to re-consider the rainwater goods, which have been redesigned to function more efficiently.  The original lead lined gutters have been replaced with stainless steel.  Sometimes, a direct ‘like for like’ replication of the original is not necessarily the best way forward for the building, particularly when it comes to ensuring that it remains watertight for the future. 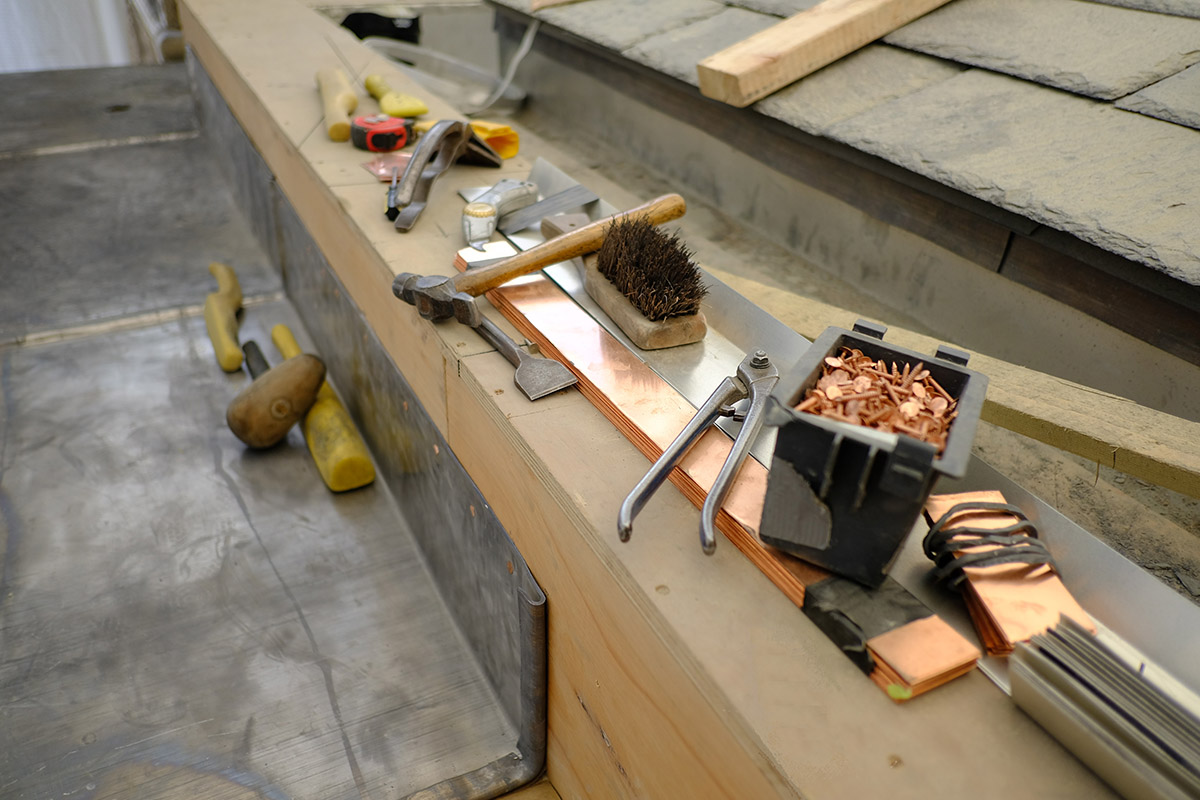 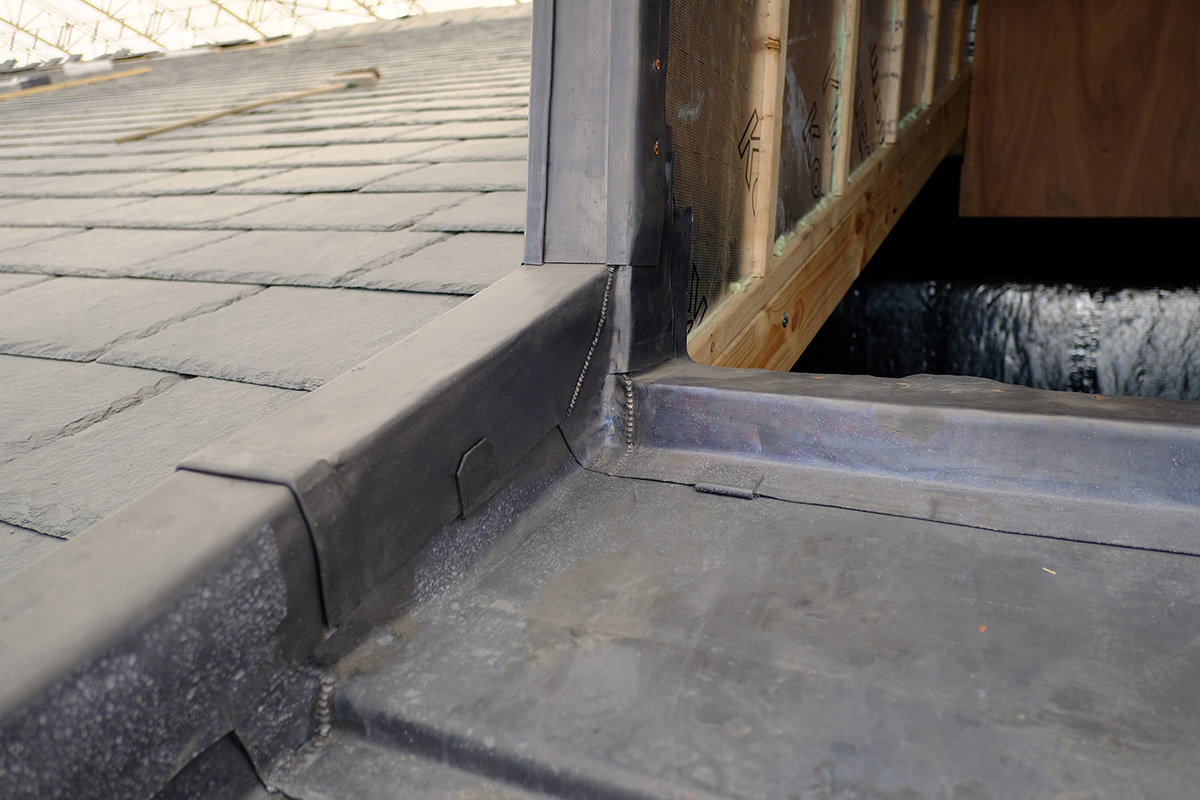 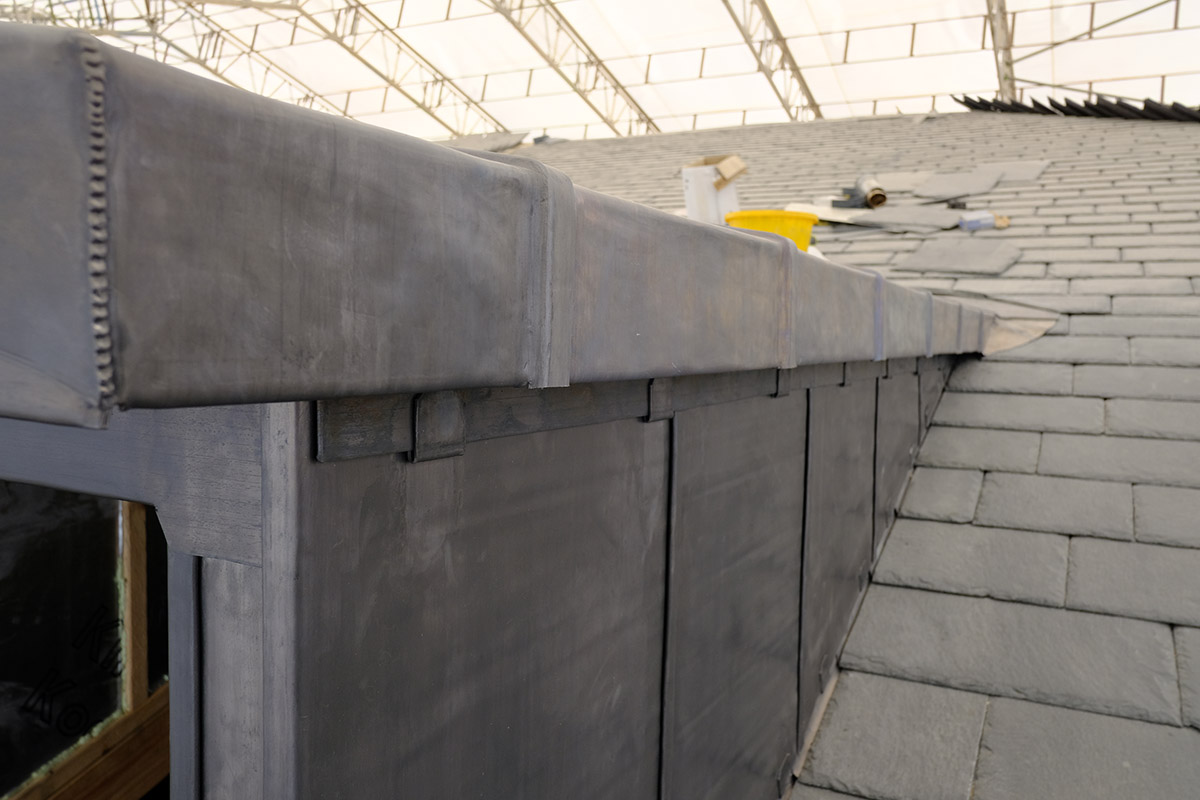 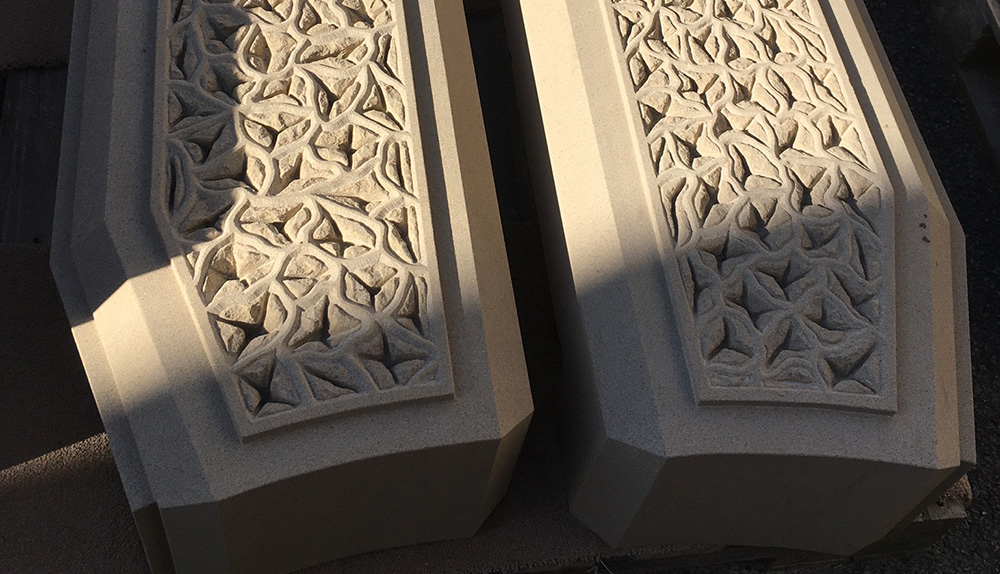 PEELING BACK THE LAYERS

In the later stages of our project at St George’s, we were asked to assist with an interesting aspect of the works.  Back in 1903, to celebrate the Hall’s 50th anniversary, a tessellated mosaic floor had been created in the entrance vestibule, by Venetian artists.  Sadly, it was now all but obscured by thick layers of adhesive material that had been applied under carpets, with just a small section still visible under the seating in the bar.  We undertook the uncovering and restoration of the mosaic.  Work needed to be carried out quickly, to fit with the sequencing of the decorating works underway in that part of the building, so was carried out over a weekend.  We removed the resin, millimetre by millimetre, gently grading it down until the surface of the tiles were fully exposed.  The mosaic was then carefully polished, to restore its original lustre.  It was a pleasure to restore this beautiful, forgotten, original feature of the building. 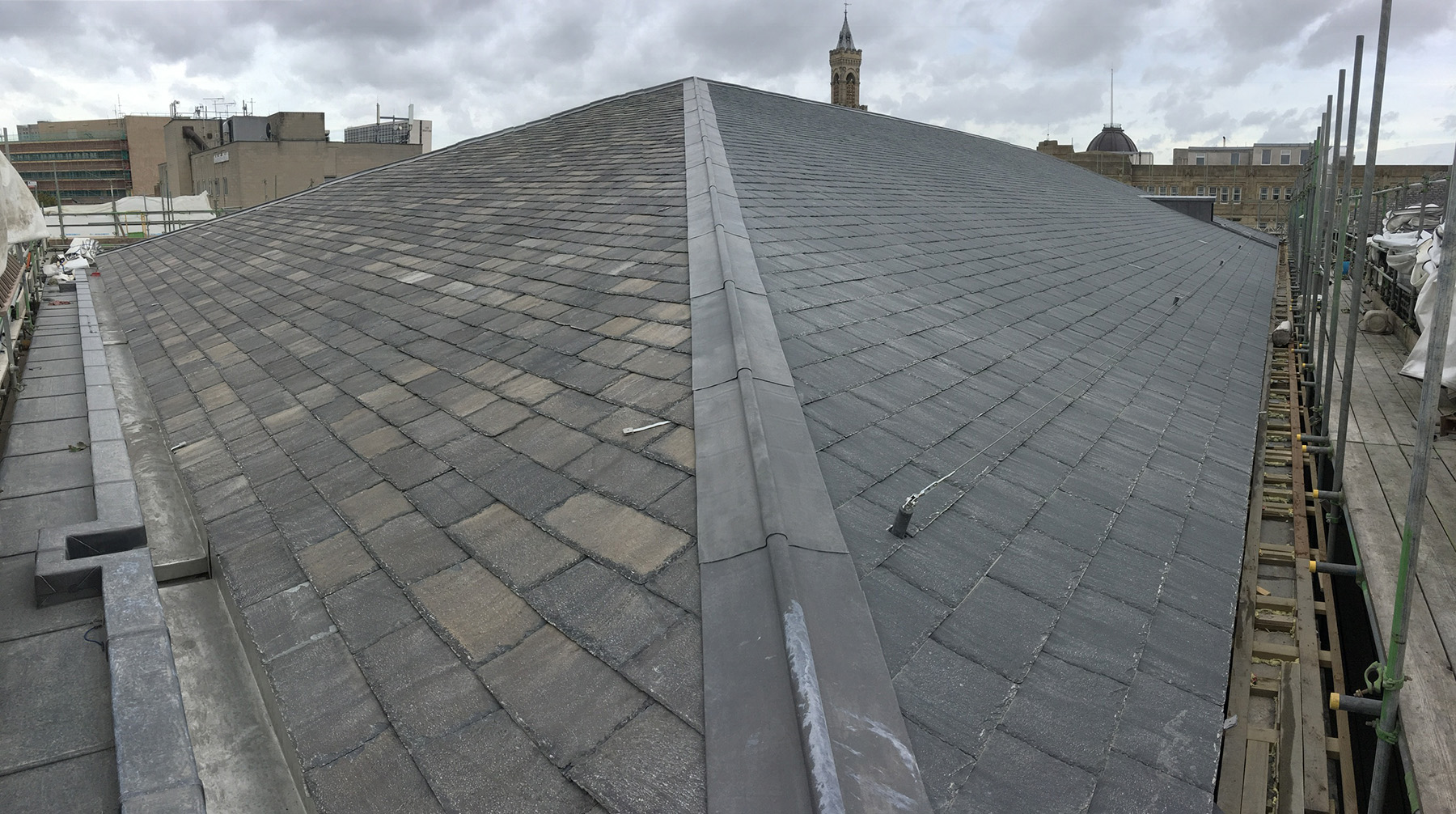 The exterior of the building is once again looking magnificent and, along with the interior refurbishment works undertaken by Henry Boot Construction, the Hall is once again ready to be enjoyed by the people of Bradford. 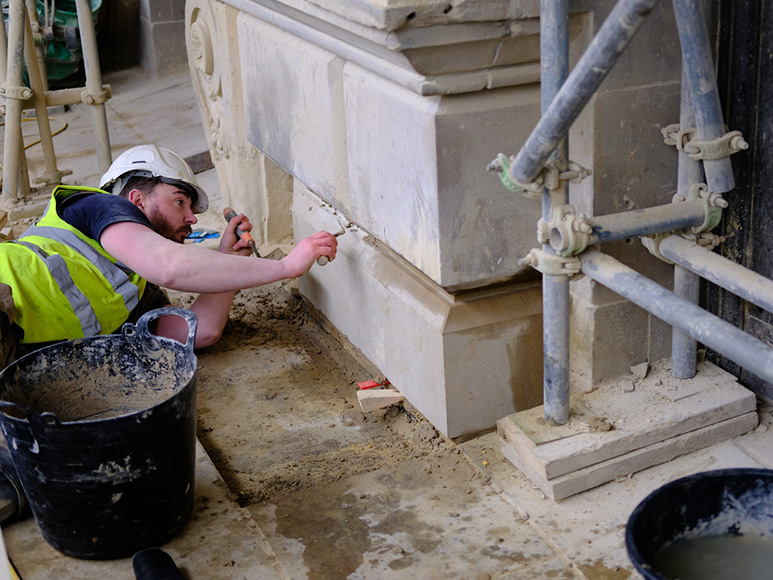